Yen Kai the spend-thrifter loves to eat, drink, travel and  save money. He's always pondering on ideas to solve the little problems of everyday living (what to eat, where to go, what to buy, how to save money etc.) and shares them here on this blog.

Please use this contact form to leave a message.

© Yen Kai and yenkai.net, 2006-2019. Unauthorized use and/or duplication of this material without express and written permission from this site’s author and/or owner is strictly prohibited. Excerpts and links may be used, provided that full and clear credit is given to Yen Kai and yenkai.net with appropriate and specific direction to the original content. 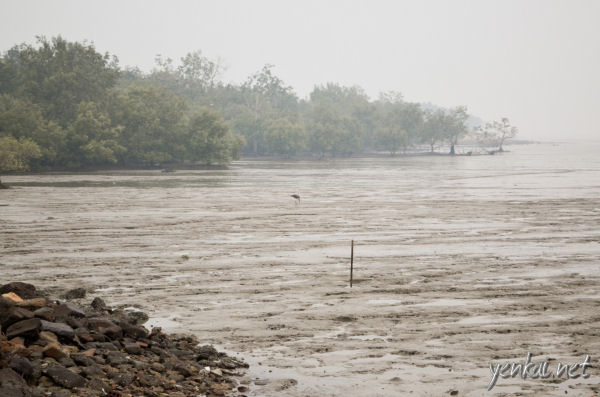 Pontian is about 1.5 hours from Singapore if there is no jam during border crossing. I initially wanted to go via Woodlands, but on learning there is heavy traffic at the causeway (through the LTA signboard), I immediately changed my route and headed towards the second link. I got my wife to verify via the webcams that the traffic was bad and indeed it was so. On the other hand, there was hardly any traffic at Tuas. Tuas is nearer to Pontian anyway.

I set my GPS to bring me to Kheng Guan Hiong, the Kopitiam that is a favourite among locals in Pontian. Unfortunately, the GPS coordinates didn’t seem accurate, so by the time I found my way there (with just a little bit of guessing) they were just closed (4pm). We went to another coffee shop (a modern looking one run by youngsters) and sad to say, we couldn’t tell the difference between the Kopi and Teh that was served. They were way too milky. The Kaya butter toast was cold and soggy. I think there’s no point for me to mention the name of this place.

There really isn’t much to do in Pontian, except maybe checking out the coastline there, which consists of mangroves. Since it was hazy, we just proceeded to check in to the hotel. Dinner, as recommended by Johorkaki, was at Zu Qiu Seafood Corner. Zu Qiu Seafood offers seafood dining right next to the sea (or mangroves – I suspect the area is seldom submerged under water). It was actually very comfortable dining in that open area with very slight breeze. The food didn’t turn cold very quickly either. Perfect. 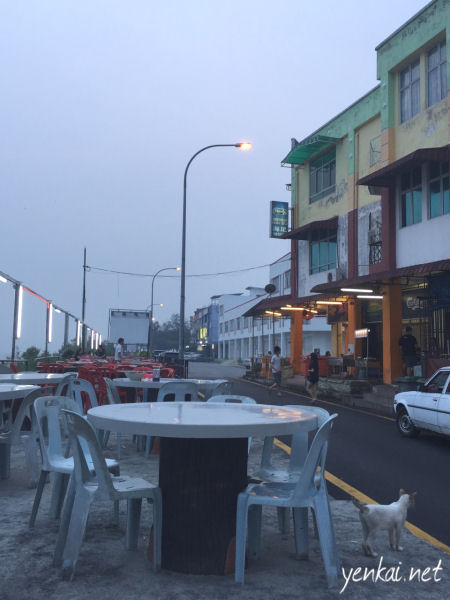 Dining on the sidewalk by the sea

While waiting for the food (it took a while but not to the point of being unbearable), you can take in the pleasant sea sight. To see this you have to arrive before 7pm, which is a good idea anyway since the place gets more busy past 7pm. We spotted some large-sized migratory birds, which was a nice surprise. Apparently, the Johor shoreline is a hot spot for bird watching.

Migratory bird at the mangroves 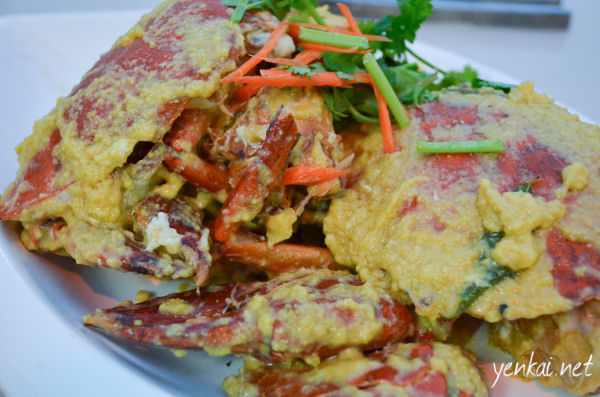 Now, on to the food. Salted egg crab. The sauce was very rich and creamy without feeling very greasy, and it was not dry to the point that you can see the crumbs of the mashed salted egg yolk (which is common elsewhere). I felt like licking up all the sauce that clung on to the crab shell. The crabs were very fresh and sweet tasting. Being large sized crabs, they were good value at 124 Ringgit (S$41) for 2 crabs. These were the best salted egg crabs i ever had. 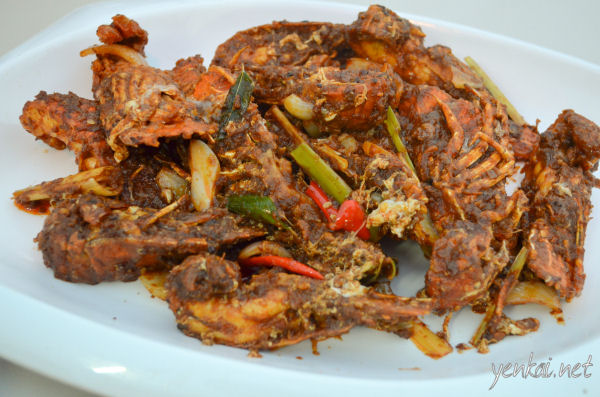 Kam Heong crayfish. 42 Ringgit (S$13.8) for about 16 half-pieces, it’s a steal! Very fresh as well, the flesh was soft and bouncy. The Kam Heong flavour was well executed. 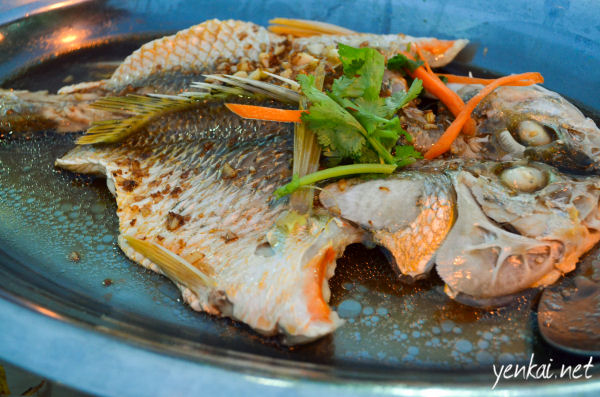 HK style steamed Garoupa – was overcooked. The gravy was too sweet. I think it’s better to stick to shell fish dishes if you come here. At 48 Ringgit (S$15.60), or 80 Ringgit per kg, it wasn’t expensive. 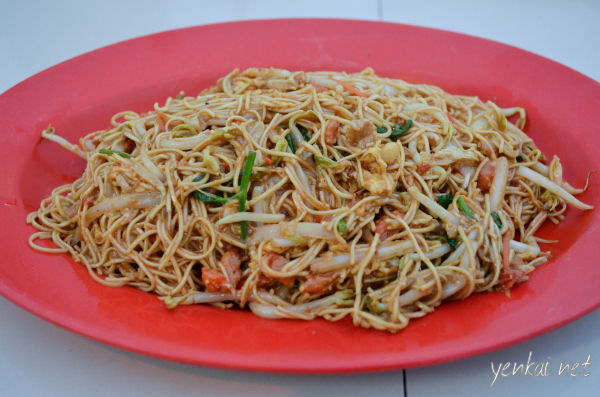 Empetor’s noodles was one of the dishes mentioned on Johorkaki blog post. Wet and didn’t feel very oily. At only 5 Ringgit (S$1.65), it is unbelievable value! Kids loved it. 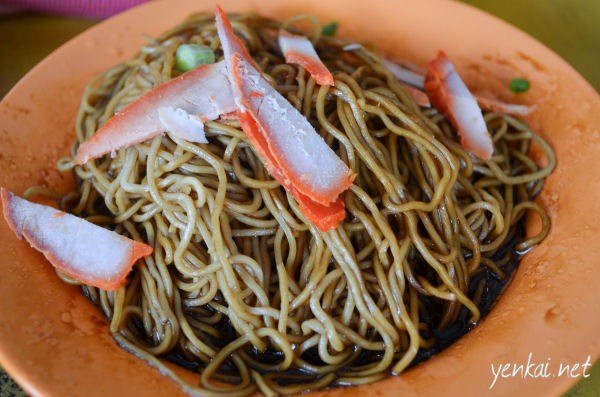 In dark sauce (and lard) 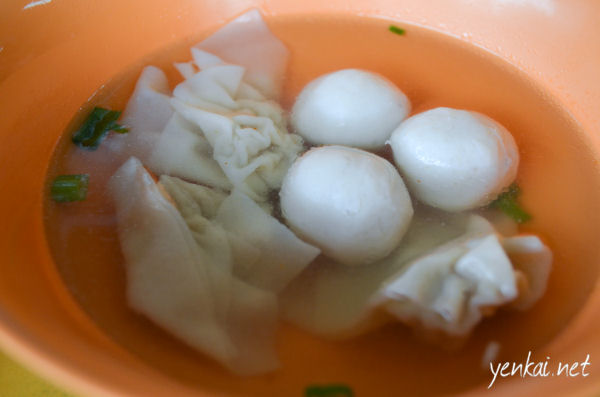 I was quite surprised when I was asked what kind of sauce i wanted to go with the noodles. I thought it came with a standard sauce. I chose dark sauce for the kids and spicy tomato sauce for myself. I learned something new: the noodles matter the most, not the sauce. The noodles were so good that it really didn’t matter what sauce was paired with the noodles. That said, I think the spicy tomato sauce was actually better than the dark sauce. The noodles were crunchy, exactly how they should be. Nothing can be worse than soggy noodles swimming in a pool of diluted sauce. As for the wanton, well, they were good, with thicker than usual wanton skin and good amount of filling. But i’m not so much a wanton nor fishball person. The char siew that came with the noodles were surprisingly good. 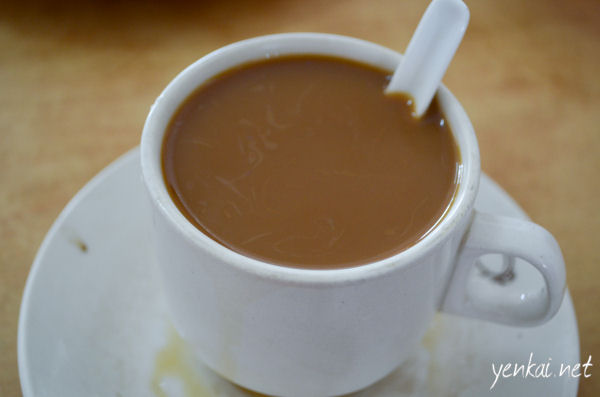 Since there was no coffee served at Heng Heng, the coffee addict that we are mandates a visit to Kheng Guan Hiong which we missed the day before. On arrival there, past 10am, it was still quite busy. We ordered 2 Kopi, 2 pieces of kaya butter toast, 2 pieces of Roti Canai (Prata) and Chee Cheong Fun. It seems like Pontianites like their coffee slightly diluted and milky. This was still a good cup of Kopi, with strong enough coffee taste. On the other hand, i cannot endorse the Kaya butter toast, which was slightly soggy (Pontianites’ preference?), though it was still better than the one we had the day before. The Roti Canai was very crispy, highly recommended. The Chee Cheong Fun was pretty good too – elastic and chewy. 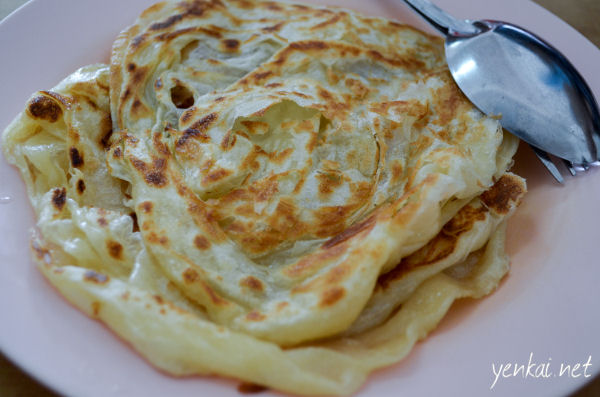 Thankfully, the haze cleared up and we could go to Gunung Pulai for a short hike as planned. The road leading up to Gunung Pulai is called Jalan Air Terjun (waterfall road). The entrance is locked up with a warning sign saying that it is out of bounds. However, it was easy to climb over to the other side, and you’re bound to see people demonstrating how it is done if you’re there on a weekend. As we didn’t bring along our walking poles, we decided to just get to the waterfall, a short 15 minutes hike up.

This is a very small waterfall. There is a taller waterfall further back, but the way leading to that waterfall is now blocked by rocks. I learned that Gunung Pulai was closed to the public due to a fatal accident years ago, and it is most likely that these very rocks from a rockfall were the culprit. 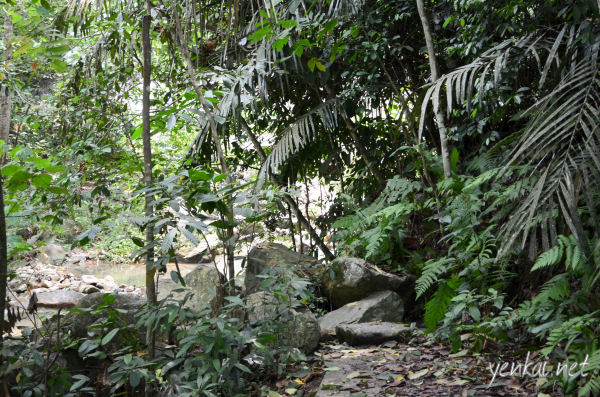 Rocks blocking the way to the other waterfall

Anyway, my wife vowed to be back to hike the 5km route to the top of Gunung Pulai some time in the future. Satisfied that we did something meaningful other than eating, we went on to our next destination – Tesco. The Tesco Extra at Mutiara Rini is the latest and greatest Tesco store in Johor Bahru, which we haven’t been to. On the way there from Gunung Pulai, we passed by Pekan Nanas (literally Pineapple Town) where i picked up 2 pineapples (said to be honey pineapples). 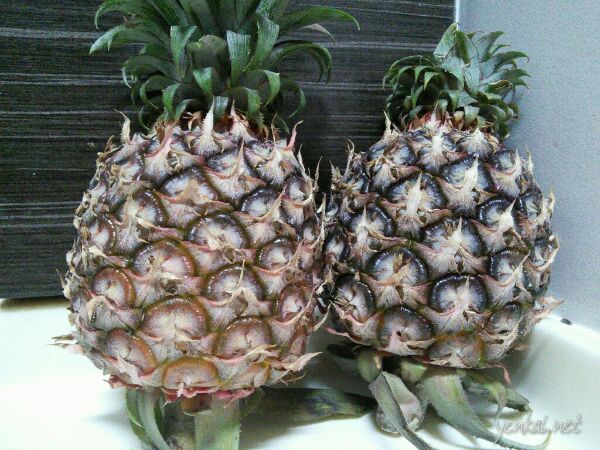 After the grocery shopping, we made our way to Hotel Mutiara where we were going to spend the night. Hotel Mutiara is just next to the famed Holiday Plaza. I took the opportunity to check out Holiday Plaza, a place i haven’t been to since my days as a Uni freshman back in 1996. In those days, Holiday Plaza is THE place to get pirated CDs. Now, as expected, it is just a run down place. Even then, there were many security guards at all corners of the shopping centre, not a comforting sight actually. 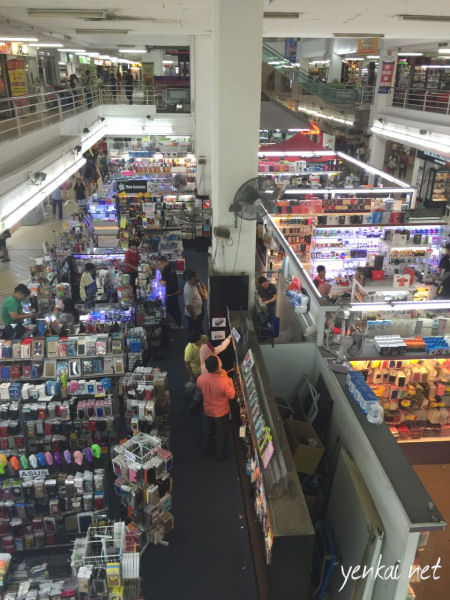 There are many eateries in the vicinity of KSL City, some ten minutes walk from Hotel Mutiara. My wife decided to be lazy and to just eat at Meisan Restaurant, which is in the hotel itself. Since we’re already there, i thought, why not? Meisan is supposed to be highly rated. It turned out to be so-so. The Szechuan style dishes didn’t quite come close to tasting like Szechuan dishes. I guess the unfortunate thing is that the restaurant is (understandably) pork-free, and minced chicken can hardly emulate pork. 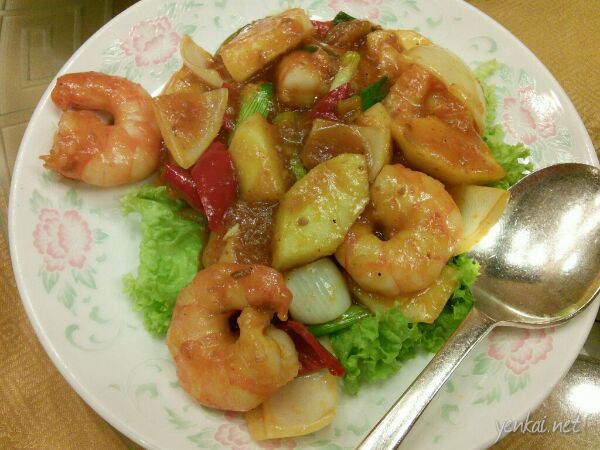 Prawns with apples. This dish was ok.

Chinese style beef steak. The meat is tenderized, which did improve the texture, but it also felt a little too puffed up, and was also a tad too sweet.

Home-cooked style tofu. I dislike dishes being littered with too many ingredients, like the beans you can see above. 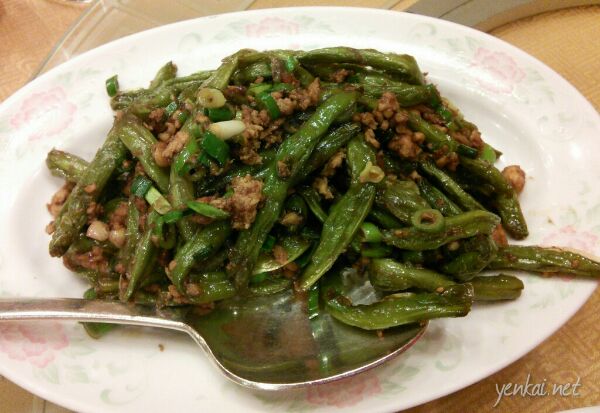 All in all, Hotel Mutiara offers a comfortable and affordable stay in JB, a nice way to cap our weekend getaway in Johor.

How to make kopi

Kluang – where rail and coffee comes together